In the center highlands of Bali is the serene mountain area of Bedugul. Here, vegetable, fruits, and flowers thrive in the alpine climate, and a colorful little market at Bukit Mungsu offers a wide selection of produce including exotic wild orchids, roses, and colorful birds. There is a large botanical garden nearby. Ulun danu temple is one day tour to Tanah Lot temple that offered by balinatureholiday.com 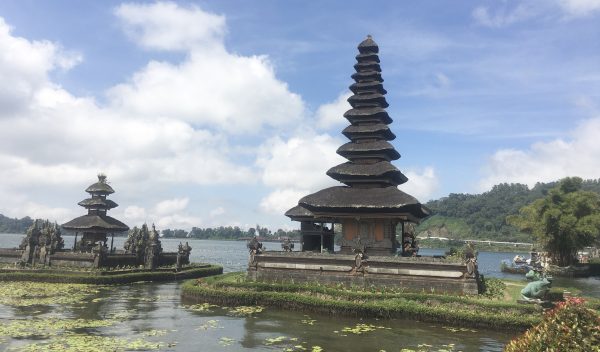 Pura Ulun Danu Bratan or Pura Bratan is a large water temple in Bali, Indonesia – the other main water temples are Ulun Danu Batur Temple.  This temple complex is located on the northwest edge of Lake Bratan in the mountains near Bedugul.  the water temple meets all areas in the stream area;  on the edge of the downstream there are many small water temples that are specific to each irrigation association (subak). This temple is actually used for offering ceremonies for the goddess Dewi Danu, goddess of water, lakes and rivers.  Lake Bratan is one of the important lakes in terms of irrigation.  This complex was built in 1633 which is spread on several islands.  Meru, with eleven roofs dedicated to Shiva and his wife Parvati.  The Buddha also has a place in the temple of the Hindu god.  Lake Bratan is known as a “holy mountain” lake, this area is very fertile, located at an altitude of 1,200 meters, and has a very cold climate. 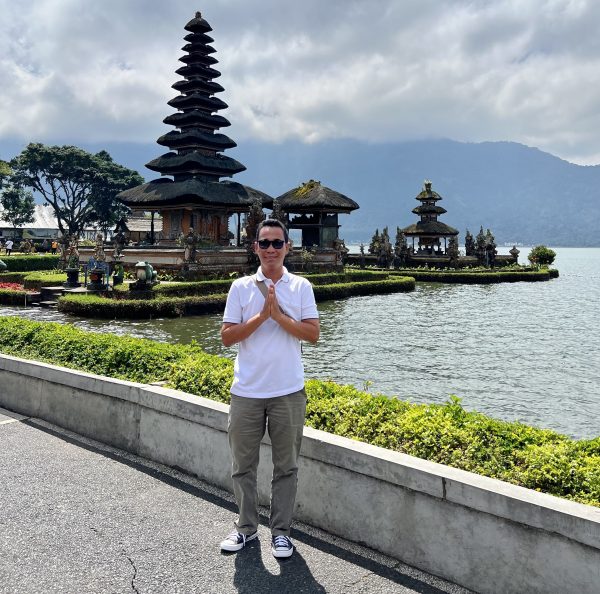 This is a major stop for the tourist, but it is too beautiful to miss. The outer grounds have been formally landscaped with clipped lawns and bold flowerbeds that reflect the elegance of lakeside temple and its stately meru. Tourists are allowed to roam the gardens and through the outer courtyard, but entry into inner courtyard is forbidden, though one may peer into it over the walls. The temple run s said to be associated with the Bratan clan of the Pande caste, from which the lake takes name. The goddess of the lake is honored at Pura Ulun Danu Beratan at the taller of two meru on a little island near the shore. 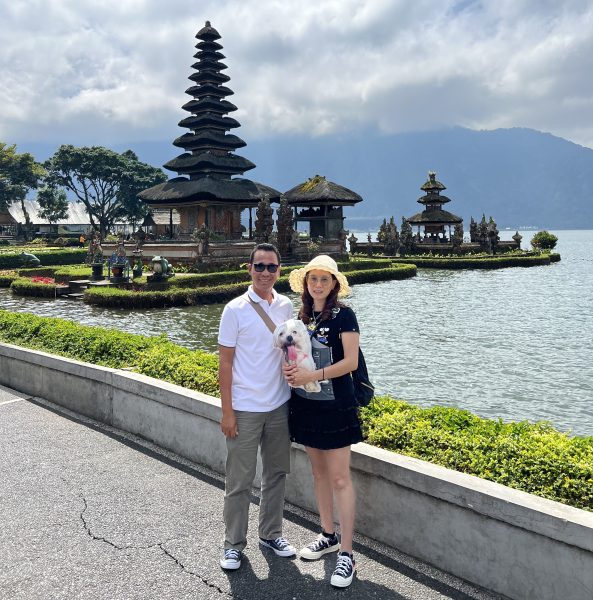 Pura Taman Ayun tourist attraction is a temple of Mother (Paibon) for the family of Mengwi Kingdom, Bali. This temple is beautifully designed with beautiful gardens, surrounded by fish ponds so that when in this place as if in the middle of the lake.

Taman Ayun Temple was built in the 17th century (supposedly built in 1634) by the first king of the Kingdom of Mengwi Tjokerda Sakti Blambangan with architects from China. Initially this temple was founded because it pretended the place of religious worship when it is available too far distance, to reach by Mengwi community. This temple is very famous to visit and it’s populer on our balinatureholiday packages. 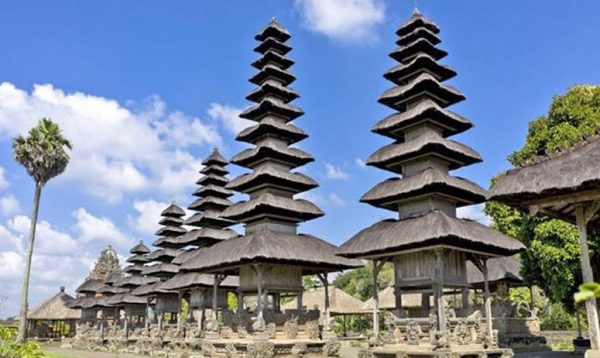 The monkey forest has become a tourist site of the worst sort. The positive side is that there are lots of fruit bats that have found refuge in the trees. The temple and forest are bouncing with tame monkeys, not yet too mischievous, and there are pleasant guides to accompany visitors around the site. This place is most popular on one day tour to Tanah Lot temple that offered by balinatureholiday.com 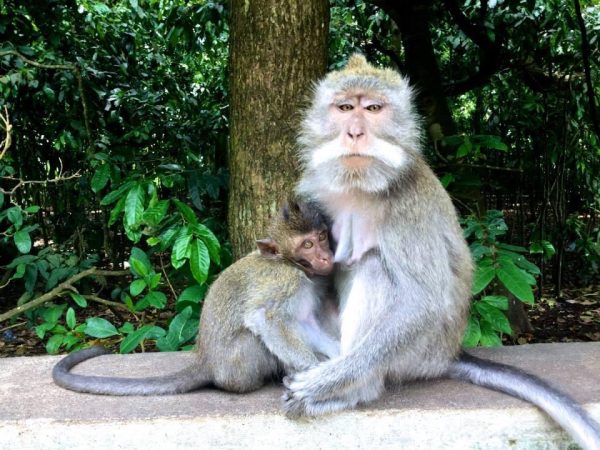 Bali Handara or famously known as Bali Handara Gate is one of the attractions in Bali that has been recognized by the world.  For those of you who often visit Handara Golf and Resort, make sure you have captured the best moments in this one place.  Bali Handara Gate is one of the very Instagramable gates and is so popular among Balinese and surrounding communities.  If you are one of the people who want to find and get an online Instagramable tourist spot to meet your ranks of social media account pages, make sure you have visited Bali Handara Gate. Capture your best picture with the background of the very exotic Bali Handara Gate gate, but still with a traditional Balinese feel.  Not only that, you can also see the charm of the soothing green scenery in this region.  The background of the green hill stands firmly between Bali’s Handara gate which adds to the perfection of your tour. 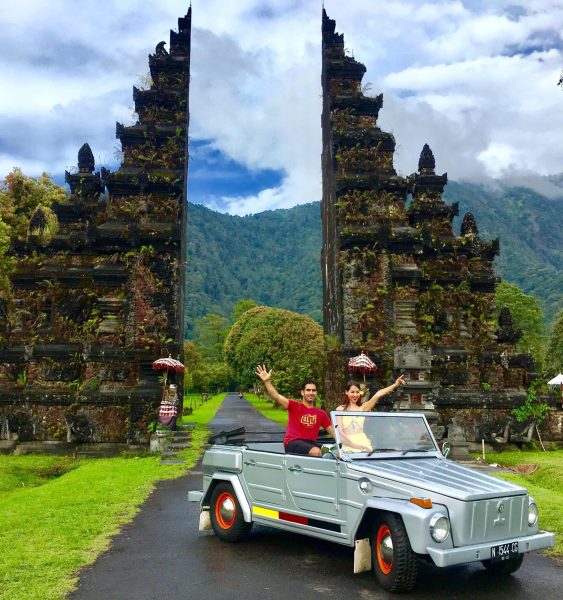 The road climbs up high into the hills to a small village named Jatiluwih. With a height of 850meters above sea level, the view here is one of the finest imaginable. Bali’s terraced paddy fields stretch into endless contours over the hills and valleys as far as the eye can see. 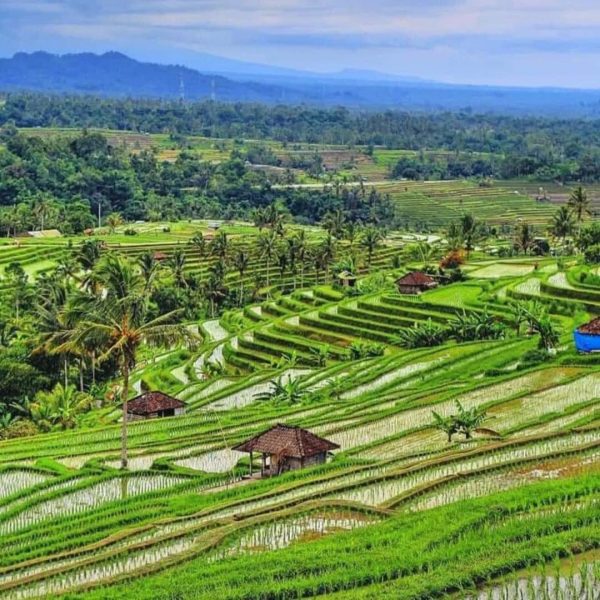 In dense jungle near the peak of Batukaru, at the end of a narrow winding road, lies the ancient mountain sanctuary of the Rajas of Tabanan, Pura Luhur Batukaru. Here mythical tigers roam the forest, appearing each year in their spirit from during a trance dance of the temple festival. The ancient temple complex has a number of separate sanctuaries joined by damp mountain paths, a bubbling spring and a large rectangular lake with another shrine in its midst. In the main temple a single seven-tiered meru to Mahadewa, the deity associated with Batukaru, as well as shrines for the three mountain lakes, Bratan, Buyan, and Tamblingan. Built as the state temple of the kingdom of Tabanan, and ancestral temple of its royal family, it has the distinctive stone shrines or “prasada” of all those temples closely linked with Majapahit influences. 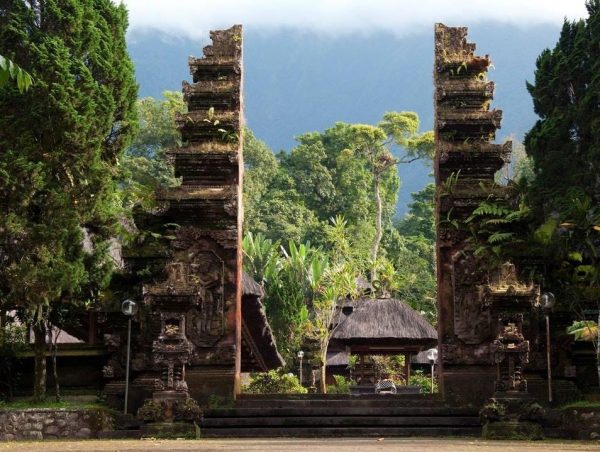 According to legend, the temple Pura Pakendungan, better known now as Pura Tanah Lot, was founded by the 16th-century priest Danghyang Nirartha out of sheer adoration for the natural beauty of the landcape here. It’s not hard to understand why; the power of the and the abrupt drama of the coastline here are awe inspiring. The little temple sits a top an outcrop of rock in the surf, guarded by sea snakes. Besides Pura Tanah Lot there are several other temples nearby arrayed along the coast: Pura Enjung Galuh, Pura Batu Bolong, Pura Enjung Mejaan, and Pura Beji, all of them presently in a state of disrepair, certainly due to the violence of the sea and wind which erodes the coastline constantly. The most picturesque of these is Pura Batu Bolong ( meaning “the temple on the rock with a hole in it” ): a wall of rock juts arch is carved out by the sea. 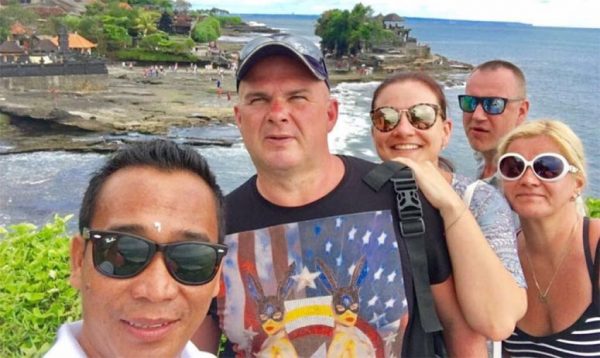 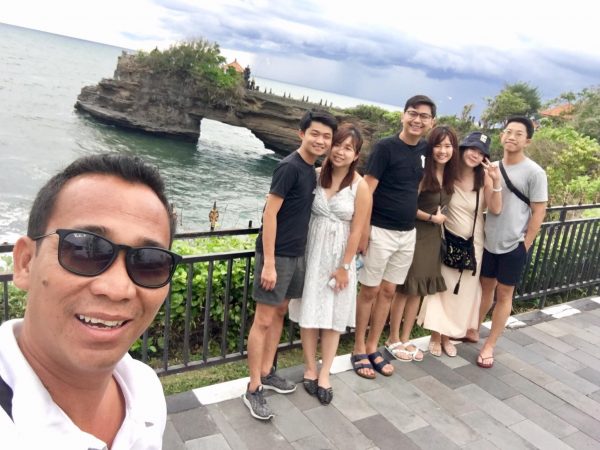