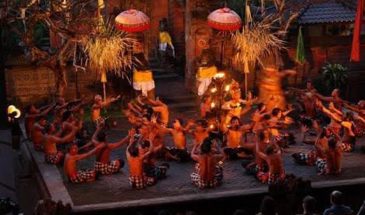 Bali Tour Package For those who have only limited time of stay this one  day tour is the best choice and best solution, visiting  Batubulan village to see barong and kris dance. Then see the processes of Batik making at Tohpati village, visit Celuk village as gold and silver smith, Mas village is central of wood carved, Batuan Village for painter community and thier house compound then visit Bali Hindu Trinity.

Next stop will be at Tegenungan village to see beautiful waterfall. Buffets Indonesian lunch at Kintamani village while enjoying the stunning view of Batur Volcano and it’s lake. Drive down to spices garden in Sribatu village and then continue to Tegallalang rice terrace. Visit Puri Saren in Ubud and next stop at Batubulan to enjoying Kecak and fire dance.

This village is the first on the route from Denpasar, and its name “moon stone” is indicative of the predominant craft in the village, that of the stone carving. The art of Batubulan can be seen all over the island in temples, shrines, at bridges, houses, and even in hotels, in soft stone sculpture and carvings, images of gods and demons, warrior-guards and even animals. The main road through the village itself is lined with workshops, and stone creatures of all sizes and shapes peep from the sidelines. The famous Barong and Kris Dance is also performed here, there are several different group perfoming daily, each at a different temple pavilion or banjar, from at 09.30 to 10.30 am. One of the bali tour package will visit this village. 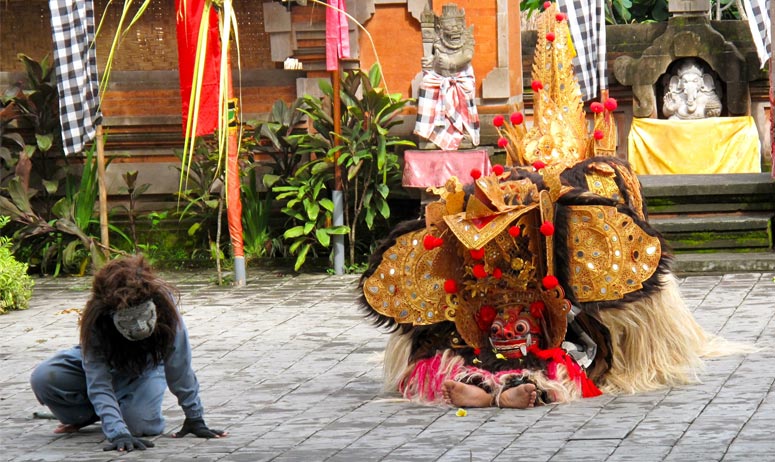 Batubulan others great claim to fame is trance – every morning at 9.30 sharp. Here you can witness the eternal conflict between Ratu Barong, the faithful guardian of community, who looks like an overdressed cross between a lion and a Pekinese dog, and the pendulous-breasted Rangda, denomic mistress of the graveyard. At the height of the drama, Barong’s entranced acolytes turn their serpentine-bladed krises upon themselves, ussully with no ill effect. Even the Balinese, who find a trance state easy to slip into, draw the line at trancing every day, so they have invented more mundane tricks to avoid being wounded by their sharp blades.

The Barong dance, as the perfomance has recently been renamed for accuracy, is nonetheless an impressive spectacle, and it is not unusual for one or teo of the players to unexpectedly drop into a gunuine trance. Three very professional groups perform the Barong Dance each morning. Barong and kris dance is included in the bali tour package that we offered to you. 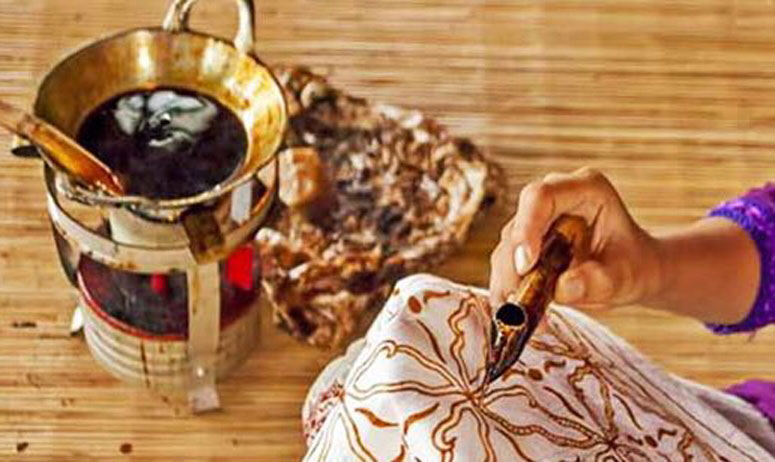 The types of batik woven crafts and traditional writing in Tohpati village produce a variety of motifs, shapes and materials. Prices start at tens of thousands to millions of rupiah. Being a mandatory place to visit while on a tour in Bali, as a tourist shopping area provides a selection of souvenir items typical of Bali, available from women’s batik shirts, men’s shirts, nightgowns, fans, paintings, various bags, wallets and various other knick-knacks with batik motifs. The price offered is in accordance with quality, all high quality. Suitable for your own needs, gifts or special gifts for relatives, friends and other loved ones at home. 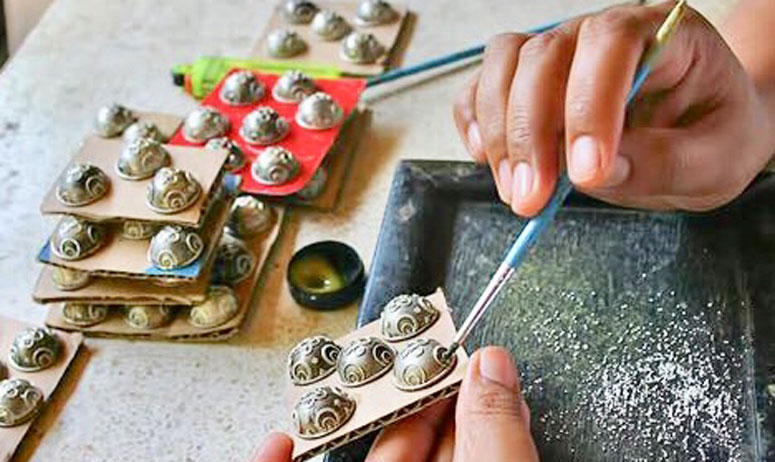 CELUK VILLAGE
Our daily bali tour package will visit Celuk village. The silver and goldsmiths of Celuk, long famed for thier delicate work, are in the midst of a great bustle of production, as orders for export of contemporary jewellery have more than quadrupled in the past few years. The skills of the Celuk artisans are such that they can move effortlessy from their traditional art of highly decorative filigree ornamentation to the streamlined geometrical shapes of today, creating contemporary pieces that are populer the world over. The cottage industry has spread troughh the entire village, far beyond the rows of ornate artshop buildings that front the main road, to the family compounds, where children work beside their elders, learning the skills of the art from a very young age. 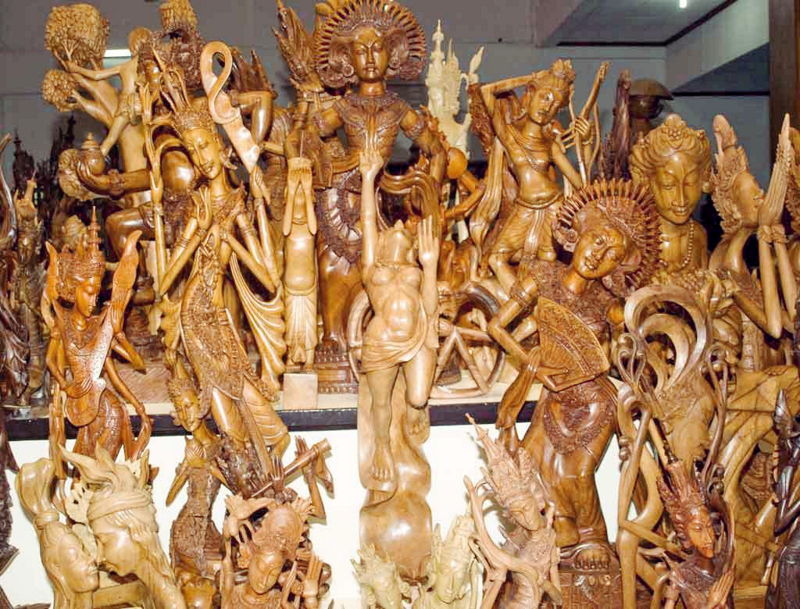 MAS VILLAGE
This village is very famous on bali tour package and about 2 miles beyond Batuan, at a thrty-three-foot stone statue of an exceptionally well-fed baby Buddha, the main road takes a sharp turn to the right, while a smaller one contonues straight up the hill toward Ubud, passing first through the prosperous village of MAS. While Ubud and Batuan were attaining fame in the 1930’s as centers of painting, Mas was firmly staking its claim to became Bali’s preeminent center of modern woodcarving.

Long before reaching the village itself, the first shops begin appear, offering anything from crude mass-produced carvings in local soft wood which can be bought for less than a dollar, to work of recognized masterd fine-grained ebony, jackfruit, or sandalwood that can set one back many thousands of dollars. The skills of Mas did not descend out of the blue but evolved over many generations.

Woodcarving was traditionally the exclusive domain of powerful clan of Brahmana, the high-priest caste which, as in Batuan is exceptionally well represented in Mas. Until this century, these craftsmen confined their activities to producing ritual objects, musical instruments, dance masks, and sacred statues, but then a few of the younger members discovered that producing carvings for export could be a profitable buisness. Several of the Brahmana artists still find time between fulfilling export orders to carve sacred art onjects for the temple. 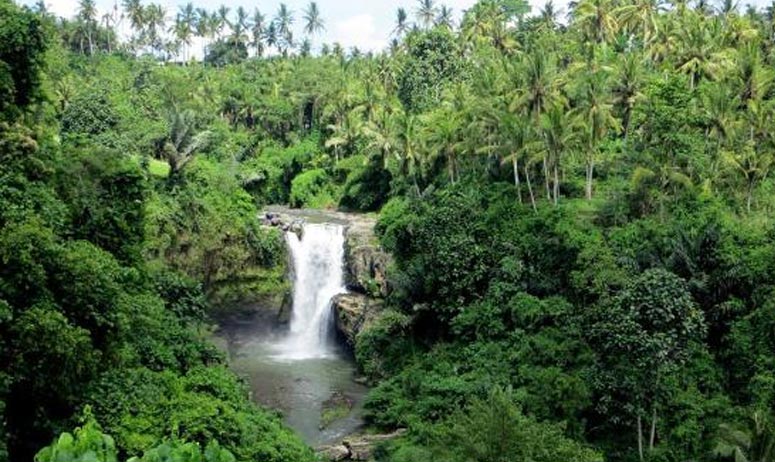 Tegenungan Waterfall is a waterfall located in Kemenuh Village, Sukawati District, Gianyar Regency, 30 km from Denpasar City. This waterfall has a height of 15 meters. Although not very high, the water discharge is very heavy. The water is also clean and clear. 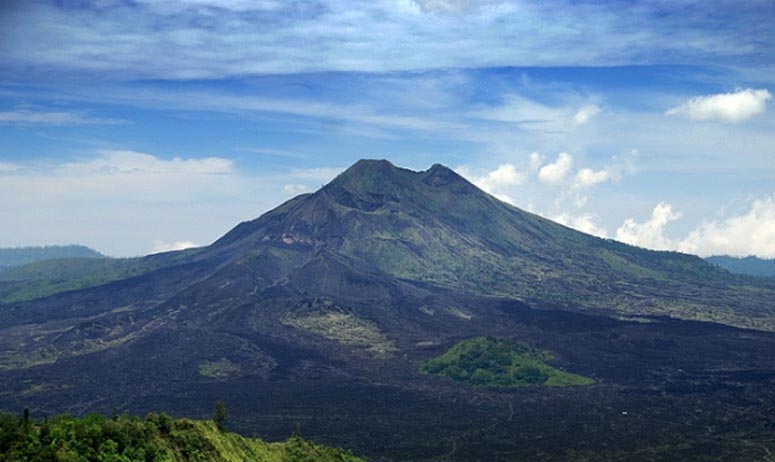 This village will visit on our daily bali tour package and Kintamani Village is Batur Volcano and creater lake. 1500 meters high, the village of Kintamani has a cool, damp climate suited to growing oranges and passion fruite and on martket day, which falls every third day, the main street becomes a bustling chaos of vendors, some of whom have travelled from far away, carrying their wares on horseback.

Batur In 1926, during the violent eruption of Mt.Batur, the original village of Batur, at the sourthern foot of the mountain, was totally destroyed. The villagers, unharmed but homeless, moved up into the high ridge overlooking their original home, and began the task of rebuilding their temple, Pura Ulun Danu. Work on this temple is still underway, and they are creating one of the most impressive temples on the island. It’s strark meru towers stand out againts the backdrop of the smoking volcano. 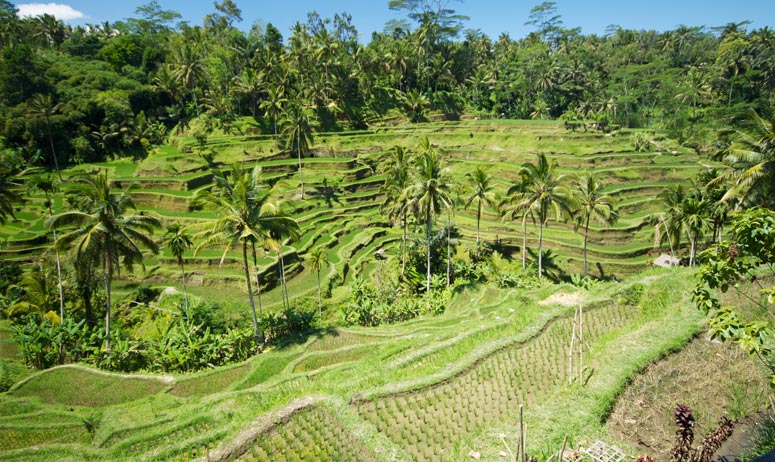 Tegallalang rice terrace is one Bali’s most famous tourist attractions. Located north of Ubud at 600m above sea level. Tegallalang Rice Terrace is one of the best spots when we visit Ubud because we will see terraces with beautiful views and very sloping layers. Although the size of the terraces is not as wide as the terraces in Jatiluwih, this terracing is the pride of the Balinese people. 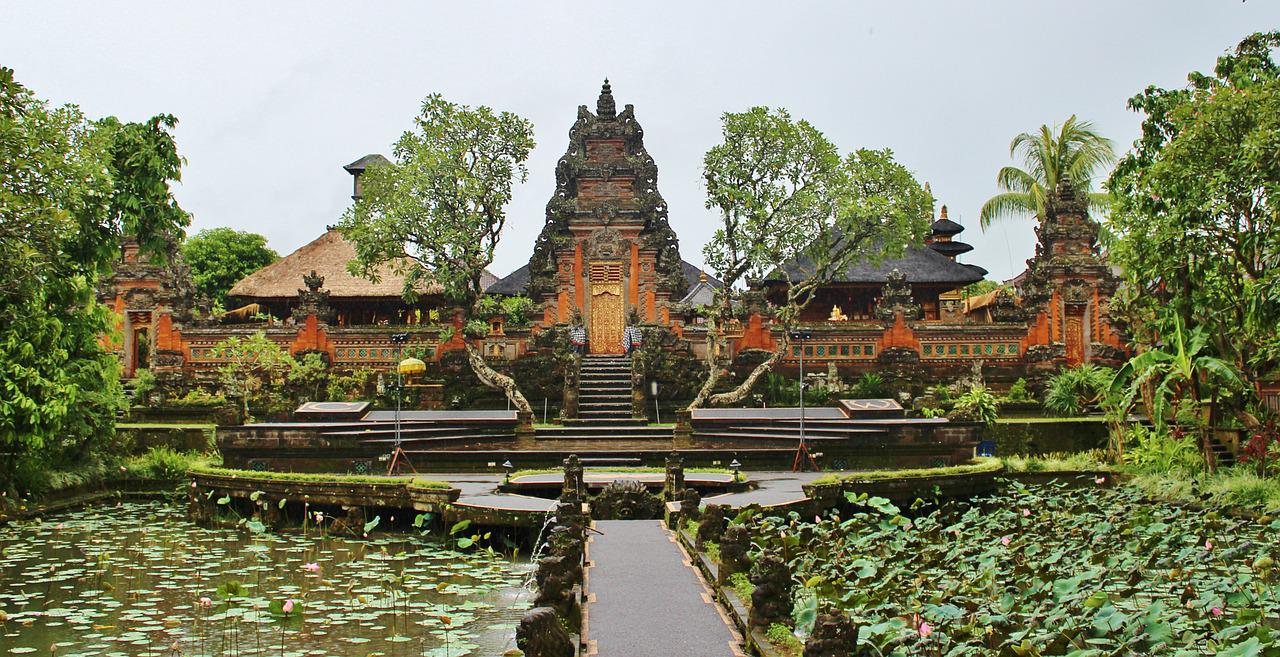 One of the most respected dance groups in Bali perform several nights a week in the outer courtyard of the principal palace, at the northeast corner of the central crossroad. Their backdrop is a grand gate, kori agung, built bu Ubud’s most famous artists, I Gusti Nyoman Lempad. It separates the outer courtyard from the inner sanctum of the palace where the current ruling Cokorda lives. The Puri Saren was demolished by the great eartquake of 1917, so the maze of courtyards, pavilion, and elaborate gates extending far behind the Kori Agung were mostly built soon thereafter.

Merajan Agung. The towering gate above a steep flight of steps immediately north of main palace is one of the finest of its kind, with a striking pyramid of Boma faces rising above its door. This is the main entrance to the Merajan Agung, the private palace temple of the Royal Family within which are housed the palace’s most revered heirlooms. This palace is included on our bali tour package. 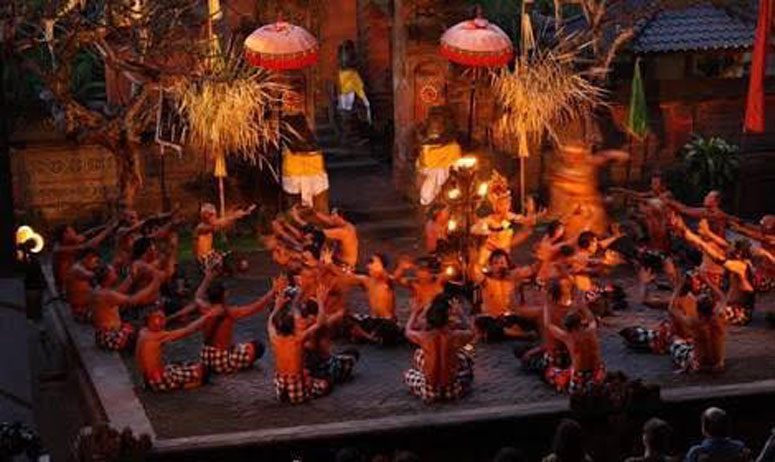 The Kecak is one of the most populer shows amongst visitors to Bali. Performance start at dusk, with the lighting of flickering torches in a giant candelabra and the placing of offerings on the stage. Sudden shouts pierce the tranquility of the evening, and out of the darkness run a troupe of chanting men wearing black and white check sarong, chesta gleaming in the torchlight. They quickly arrange themselves in a series of concentric circles around the candelabra, where they sway and chant, one moment in unison, the next moment in syncopated counterpoint.

A small group of dancers in full traditional costume perform an excerpt from the Ramayana in the midst of the waving sea of arms and bodies, dancing to the orchestrated voices. The “chak-chak-chak” of the chorus is adapted from the Sanghyang chant, and the entire performance has an ethereal quality enhanced by the flickering of the torchlight. The first Kecak was created by dancers in Bedulu, Gianyar, who were commissioned by the well-known expatriate painter, Walter Spies. The first simple version was an immediate success, and now Bali boats at least a dozen professional Kecak groups that perform regularly at the larger hotels and in special open stages built for purpose in their banjar.