The road north from Pejeng follows the course of the Pakerisan River, which remains just out of sight to the east. Several minor roads and lanes head toward the river, where little-known bathing place, ancient shrines, and monuments cut into the rock dot its gorge. The most important ones, however are in Tampaksiring.

GUNUNG KAWI
In the center of Tampaksiring, a little way beyond the market corner, a clearly signposted     side street leads almost to the brink of the Pakerisan gorge at Gunung Kawi, where a daunting flight of steps leads down to the river itself. You know that you are descending into Bali’s “valley of the kings”, for hewn into the cliffs on both sides of the river appear massive commemorative monuments to 11th-century rajas and ranis. Etched into deep, 23-foot- high niches in the cliff are five candi, temple façades with false doors leading to the “other world”. The one farthest upstream is believed to have been built for King Anak Wungsu, whose long rule over central and east Bali lasted from around AD 1050 to about 1080. The other four probably honor is senior wives who would have committed suttee by leaping onto his funeral pyre. As kings were cremated and their ashes cast into the sea, these candi contain no human remains and are not, in fact, tomb but symbols of the deified rules. Immediately south of these candi lies a warren of cloisters carved into the cliff. This was the inner sanctum of priestly guardians and trance oracles, who would pass on advice to the living from the long-dead and deified king. Re-crossing the bridge to the west bank and turning right, we find four more great candi directly facing the original five. Because all the inspirations have worn away, it is not known whether they honor Anak Wungsu’s most senior queen, his lesser wives, or subsequent generation of his dynasty. Doubts aside, they have become known as the “Queen’s Tombs “. Only the very sure-footed should attempt the journey to the more isolated “Tenth Tomb” , known to the Balinese as the Geriya Pedanda (“Home of the High Priest “). Just north of Gunung Kawi, the road reaches a major crossroads. The left branch leads west toward Sebatu; straight ahead the road goes to a palace built by Presiden Sorkarno in the 1950’s, while the right branch curves down a hill to the most famous of the Pakerisan’s many sources, Pura Tirta Empul. 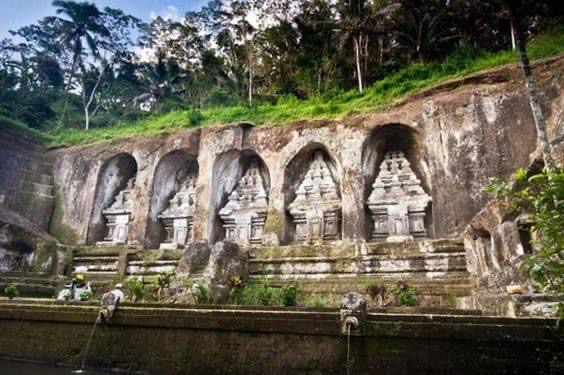 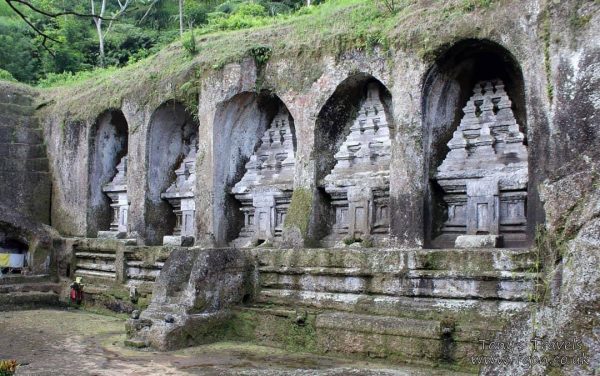 The holy spring which bubbles up in the inner courtyard of the Tirta Empul Temple in Tampaksiring is believed to have magic curative powers, and throngs of people visit the special bathing pools where clear coll water spouts from mossy walls. Legend has it that God Indra crated the spring, pierching the ground in search of holy water.

Most of the pavilions and sculptures in this temple are neither old nor exceptional; are it’s most important feature. The ritual and historical importance to the people of Gianyar of this complex lies in these pools in which Indra’s celestial army received before defeating King Maya Danawa. Pura Mengening. Just downstream from Tirta Empul, across the road and down a long flight of steps, is a far more peaceful temple complex which is also built around a sacred spring. Here, where a great tree shades the pool, a strong sense of the Balinese veneration of nature can be felt. Another flight of steps leads up to the temple itself and it’s large freestanding prasada. Prasada, now extremely rare in Bali but clearly more prevalent a thousand years ago, are square-based, multi-roofed temple buildings similar to the candi of ancient Java. They were the models for such rock-cut reliefs as are found just downstream at Gunung Kawi.

Pura Gumang. About a mile north of the crossroads, beyond Soekarno’s palace and Pura Sakenan, are fascinating fragments from another prasada. Set far back among the giant trees of a primordial forest, Pura Gumang is a treasure trove of unusual antiquities; a decapitated sculpture of Nandi, the white bull ridden by Siwa; a massive lingga; and remains of at least one large prasada. No archeological excavation has yet been undertaken in this idyllic forest grove which must, about a thousand years ago, have housed a Sivaite temple complex of great size and importance. 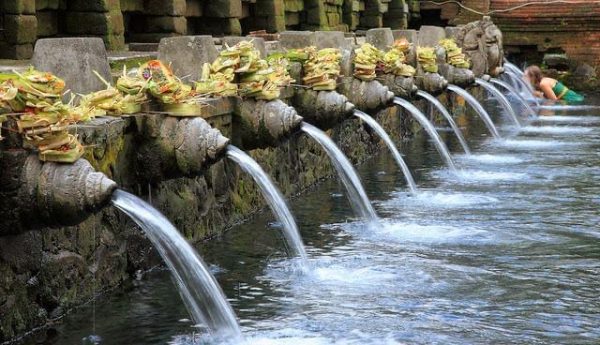 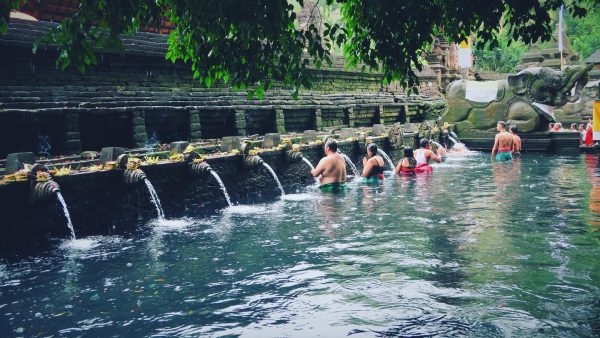 The water temple of Gunung Kawi is only a few hundred yards along this sideroad. A natural spring flows from the heart of the temple into a pool so clear that you can count the scales on the huge goldfish ghosting around the opulent island shrine at its center. Holy water is requested at an adjacent small shrine while nearby, and still within the temple walls, are the open-air public baths. Our bali nature holiday package and our visitor are welcome to explore the other courtyards where the shrines and pavilions are lovingly maintained by the people of nearby Sebatu.

There are carving everywhere at Pura Gunung Kawi, many of them old, but there are two new ones in the left-hand pavilion of the inner courtyard that are particularly striking. One is of Rawana, demonic king of Lanka in the Ramayana epic, and the other is of Hanuman, the white warrior monkey who challenges him. 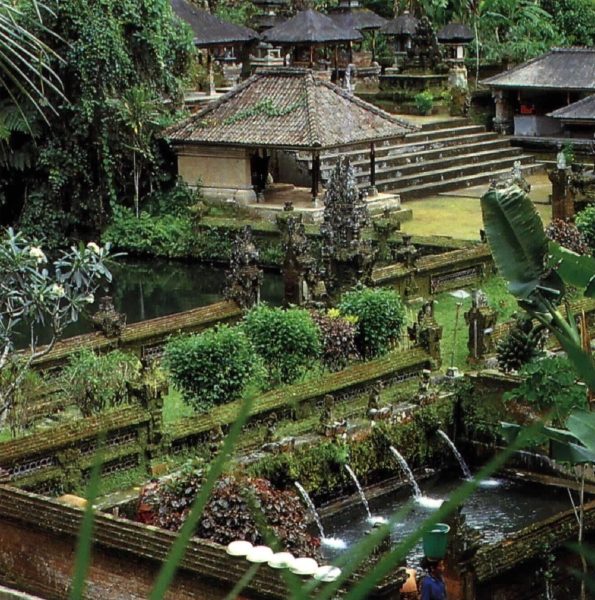 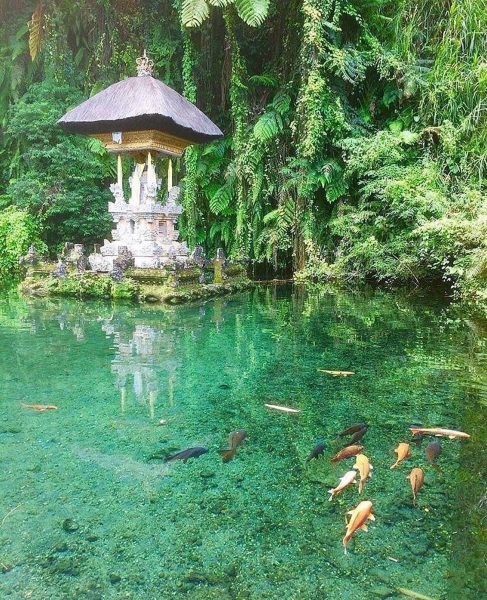