Like a ship of stone afloat in the sky, Pura Luhur Uluwatu is poised 825 feet above the Indian Ocean. The is  carved from the enormous limestone rock upon which it sits at the farthest edge. Ulu mens “head”, watu “rock” and luhur implies “heavenly”, “ancestral”, “original” and “transcendent”  all at once. It was here that Danghyang Nirartha, the Javanese high priest who brought a renewal of Hinduism to Bali in the 16th century, achieved the conscious death called moksa. Legend says that the temple was built by Mpu Kuturan in the 11th century, and then rebuilt several hundred years later by Danghyang Nirartha in anticipation of his ultimate release there. The architecture and temple statuary suggest the it is contemporaneous with Pura Sakenan. Some of its most unusual features are the unique split gate with its inward curving wings, the arched ceremonial gate leading to the inner courtyard, and the figures of Ganesha guarding both of these gates. But the most striking aspect is the layout of the temple, long and narrow in conformity with the terrain and surpisingly monkeys roam freely over this high and air place. 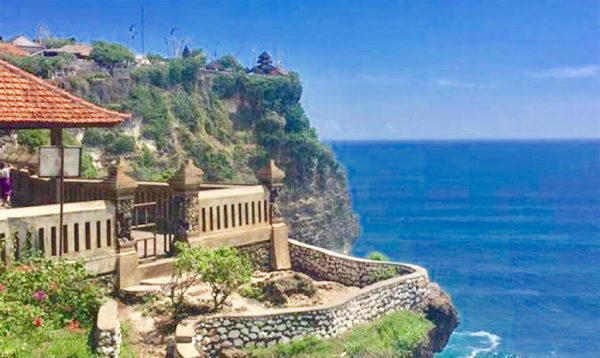 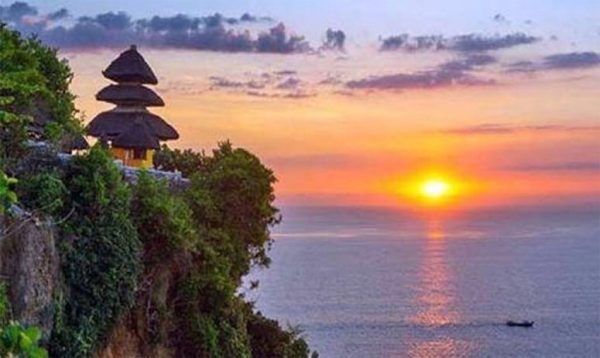 puru Ulun Siwi (or Ulun Siwi) is Jimbaran’s best-known  “sight” — for the Balinese as well as for tourists. This large temple lies at the northwestern corner of the principal cross-roads, across the street from the market. It is unusual for several reasons. Firstly it faces east, rather than south. During prayers, the worshippers face west, rather than to the north, to Gunung Agung, as is the usual practice. This is attributed to the fact that the temple, once a primitive shrine, became a Hindu-Balinese temple fairly early, in the 11th century. At this time the Javanese holy man who founded the tempel, Mpu Kuturan, still followed the custom of his native Java in orienting his temples toward holy Mt. Semeru, in East Java. It was only much later the Gunung Agung became the focus of Balinese Hinduism.

The  temple has only two courtyards, instead of the usual three. The spacious interior courtyard measures 66 x 30 meters and is dominated by an enormous eleven-tiered meru tower that is more massive than artistic. The tempel has been periodically renovated, but remains simpel and rustic, lacking the ornate paras stone carvings that characterize the tempels of Gianyar.

The principal gate, a kori agung with wings, is very similar in construction to that of Pura Uluwatu on the Bukit, except that it is made of brick instead of coral stone. There is a close connection between these two temples, and it is said that one should pray at Pura Ulun Siwi before proceeding to Pura Uluwatu.

Ulun Siwi is unusual in yet another way. It is the principal temple in Bali dedicated to the welfare of both wet and dry rice fields, and the spirits which live in the temple are thought to control the mice and insects such as grasshoppres that periodically infest the fields. Farmers and farming groups regularly come to Pura Uluwatu to get water, which they then take back home and sprinkle on their fields either to protect them form these Pests or to rid them of those already present. 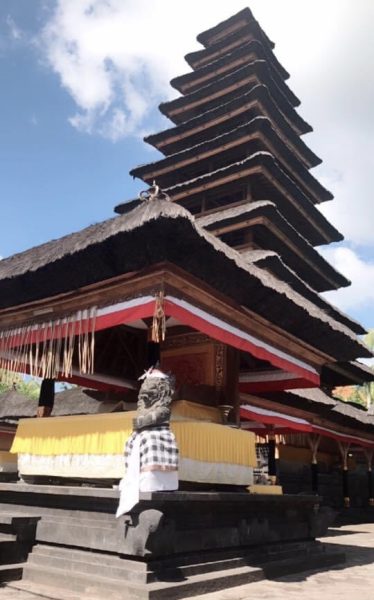 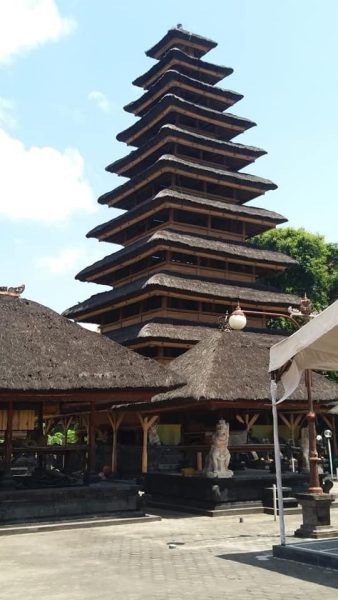 Bali’s southern peninsula, called Bukit or Bukit Badung by the Balinese but increasingly referred to generically as Nusa Dua, has a geography more Australasian than tropical. There are no rivers or streams, and any surface water disappears quickly into deep fissures in the limestone rock. Topsoil is thin and precious; nonetheless farmers manage to eke out a living planting corn, tubers, legumes, peanuts, and bananas. A number of villages and temples dot the peninsula. Pura Luhur Uluwatu. The most famous temple is Pura Luhur Uluwatu, at the southwest extremity of the peninsula, perched on a high limestone cliff. This is one of the most visited tourist destinations, especially at sunset, when for a few moments the light is unearthly. The surf just below Uluwatu is world-famous

Nusa Dua. Life on the once-poor Bukit has been transformed since the building of the five-star hotel complex at Nusa Dua (above) on the Bukti’s northeast coast in the 1980’s. (The “two islands” to which the name refers are two projections of rock in the middle of this expensive stretch of beach). 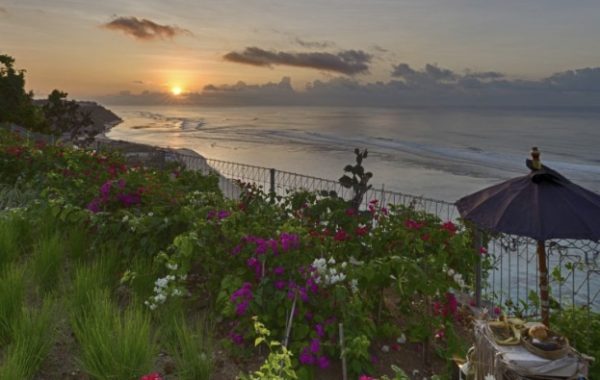 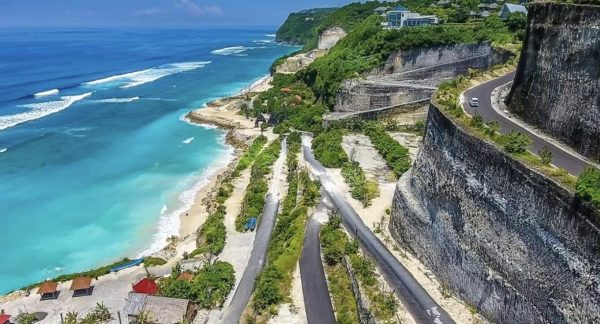 An experiment in five-star tourism, this self-countined complex of resort hotels was designed to minimize the negative impact of tourism on the social and natural environment. It was built by the Indonesian government and private investors under the auspices of the world Bank, under strict guiidelines to ensure integrated design and maximum benefits for the local people. Nusa Dua was previously an arid stretch of coconut groves, distinguished by two peninsular islets. The wendering sage Danghyang Nirartha is said to have established several temples there, all of them still cared for by the villagers of nearby bualu, even though some are within the grounds of international hotels. 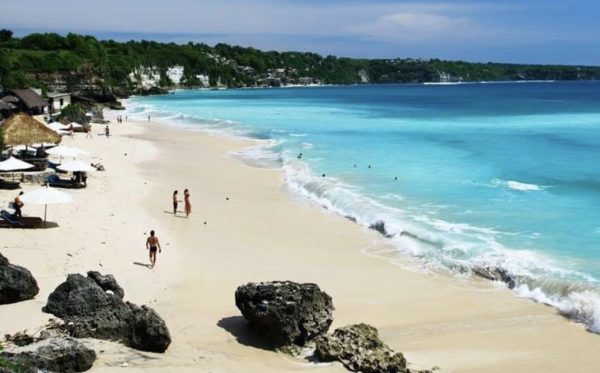 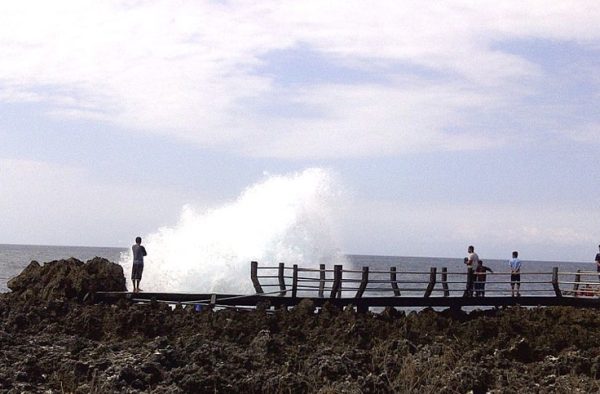 Tanjung Benoa is a finger-like extension into Benoa Harbor, directly north of the Nusa Dua complex. A tiny fishing village at the tip, Desa Tanjung Benoa, has some fine Balinese temples of carved limestone. There is a large mosque presently under renovation and a chinese buddhist temple, recently restored in brilliant colors. 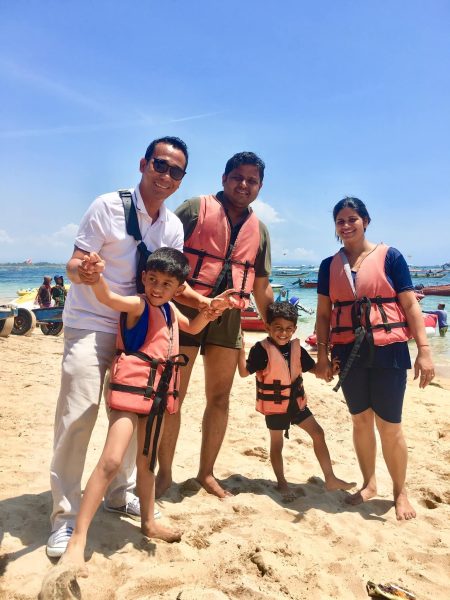